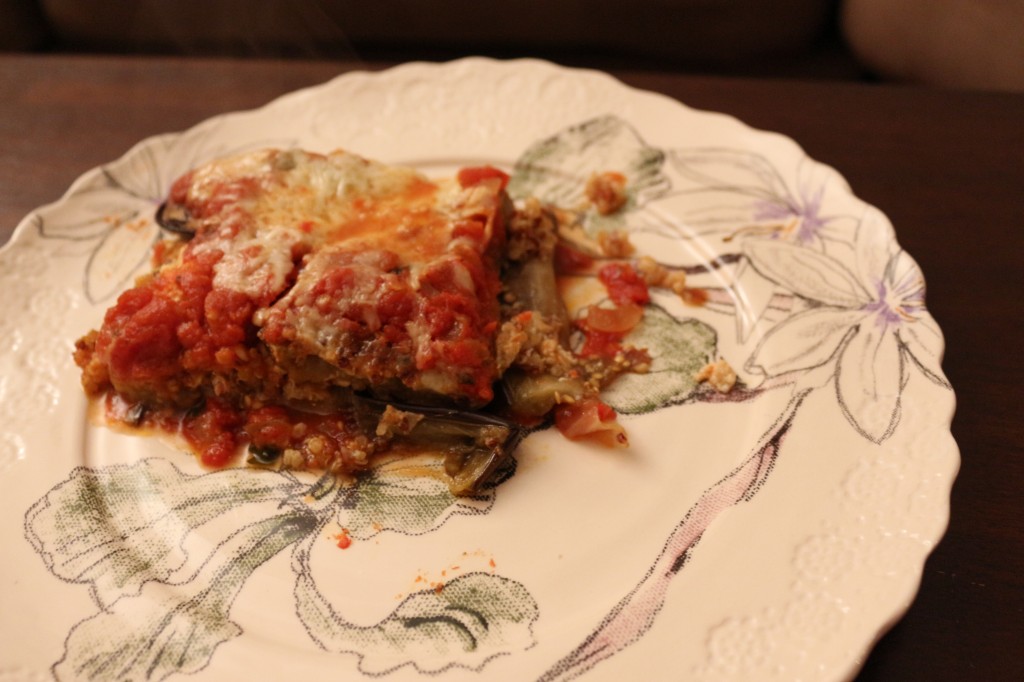 Eggplant is one of my favorite foods.  And eggplant parmesan is one of those belly warming and delicious ways to eat eggplant.  This recipe takes the concept of eggplant parmesan and makes it a little healthier, a little more calorically friendly, and gluten free!  As you will see below, this recipe does not require any fancy ingredients – in fact, even the sauce can be jarred or canned.  The most important part of making any recipe with eggplant is making sure the eggplant is FULLY COOKED.  Undercooked eggplant will make anyone think it’s an unappealing veggie.

approx. 50 oz. prepared sauce (I used one can Trader Joe’s Tuscana Marinara Sauce, with one sauteed diced onion, 5 sauteed chopped cloves garlic, 1 tsp. oregano, 1 tsp. garlic powder and a few leaves of chopped fresh basil added to it, and almost one whole jar Trader Joe’s Arrabiata Sauce; but feel free to use your favorite jarred or homemade sauces or a combination of them)

2 cups shredded Italian cheese blend (I used the Trader Joe’s variety – it has Parmesan, Romano, provolone and mozzarella — and I would recommend not going all low fat here since low fat cheese doesn’t melt as well and can get a little rubbery — you can always do half low fat half regular fat, or use a little less cheese)

Here is what you do:

1. Cook the quinoa according to the directions on the package – either on the stove or in your rice cooker. 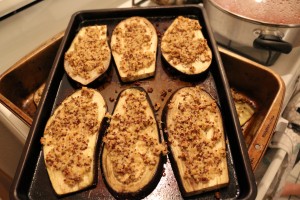 hat nice surface you just created), and slice downwards to make 5 to 6 one-half inch slices of eggplant.  (To see what I mean by the shape of the eggplant slices, just take a look at the picture to the left.)  For the eggplant slices that came off the end of the eggplants (meaning they have flesh on one side and skin on the other), use a small knife to remove the skin from the skin side so that the slices have flesh on either side (in other words, they will look as if they were cut from the middle, and not the end).

3.  Place all the eggplant on a flat surface (most likely you will use two cookie sheets for cooking the eggplant, so that’s a great place to lay out the eggplant for this step too).  Sprinkle all the eggplant generously with salt, and allow it to sweat out its bitter juices for 10-30 minutes.  (Don’t worry, you will wash off the salt and juices later, so you won’t be consuming all that salt.  So don’t be shy!)

4.  While the eggplant is sweating, prepare the quinoa crust.  (Also, if you are trying to doll up any sort of jarred sauces with yummy flavors like sauteed onions, garlic, spices, or fresh basil, this would be a good time to get those simmering as well.)  Mix together the quinoa, oregano, salt and pepper, egg, olive oil and Parmesan cheese.  Stir well to combine.

6.  Once the eggplant is done sweating, rinse each piece under cool water to remove the salt and sweated juices.  Pat each piece dry.  Take your two baking sheets and pour one tablespoon olive oil on each (or so), and then use your hand to spread the olive oil around so the whole sheet is coated with a thin layer of olive oil.  Place all of your rinsed, dried slices of eggplant onto the baking sheets in a single layer (if you have to overlap a little on a few pieces to make it fit, that’s okay).

7.  Time to encrust the eggplant.  Using your hand, spread/press the quinoa mixture onto the eggplant slices.  You should try to evenly distribute the mixture across the slices.  This will be a little tricky as the mixture doesn’t stick perfectly in the eggplant’s raw state, but just lump it on there as best you can.  (To get an idea of what this should look like, see photo above of eggplant slices with the quinoa on them, already baked).

8.  Place the two cookie sheets side by side (if possible) into the oven and cook for 30 minutes.

9.  Remove the eggplant from the oven and reduce the heat to 350 degrees.

10.  Now it’s time to assemble the eggplant parmesan, the final step before baking and eating!  You will need a rectangular baking dish.  As you can see below, the one I used was fairly large, but you can use any decent sized pan you have.

a.  First, pour/ladle in a little less than half of the sauce.  Spread it around to create an even layer on the bottom of the pan.

b.  Then, using a spatula, remove half of the eggplant/quinoa slices and place them in a single layer on the bottom of the pan.  (A little overlap is fine).

c.  Next, using your hands (since it’s really easiest this way), drop blobs of the ricotta cheese all over the eggplant.  It doesn’t need to be a thin layer, just teaspoon sized balls of cheese are fine.

d.  Again using the spatula, remove the other half of the eggplant slices and lay them in a single layer over the cheese.  (And again, a little overlap is fine.)

e.  Then, pour the remaining sauce over the entire pan, and top with the shredded cheese.

12.  Cover the entire pan with foil and bake for about 40 minutes at 350 degrees.  If you want the cheese a little brown and bubbly, you can take the f 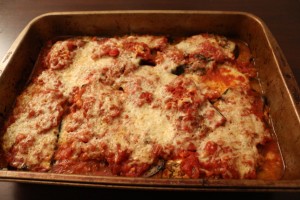 oil off for the last ten minutes, or pop the pan in the broiler for about 1-2 minutes after it’s done baking.

Remove from the oven, slice and enjoy!  (This can be served with sausages, a mixed green salad, some pasta, or on it’s own).

One Response to Baked Eggplant Parmesan (With Quinoa Crust)