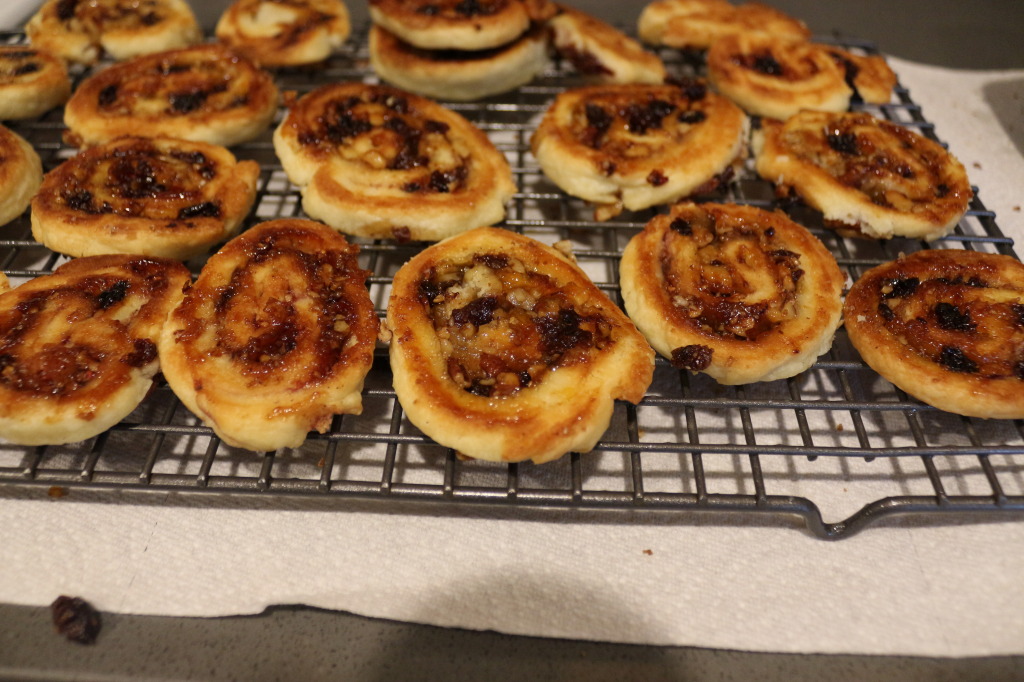 Below is a recipe for the most delicious cookies you will ever taste.  I have to admit, they take a bit of work.  But even though the first time I made them, I told Patrick I wasn’t sure the effort was worth it, everyone proved me wrong. 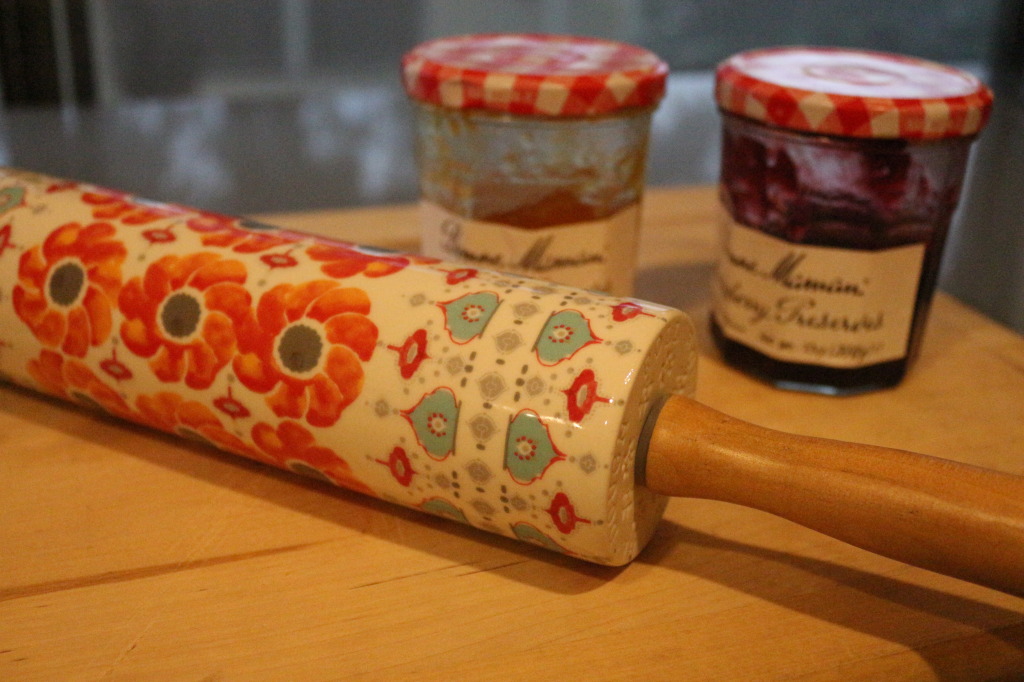 Grandma said they were amazing.  She also stopped eating the ones I gave her because Grandpa liked them so much she didn’t want to take them away.  Ashley couldn’t walk away from her fridge without eating two or three.  Patrick was obsessed with them – raw, cooked, hot, cold.  Nicki and Matt separately texted me to say they were so good.

I’m glad I tried to make these twice, so I could give you way better direction on how to make these without getting as frustrated as I was the first time.  This recipe is adapted from Smitten Kitchen. 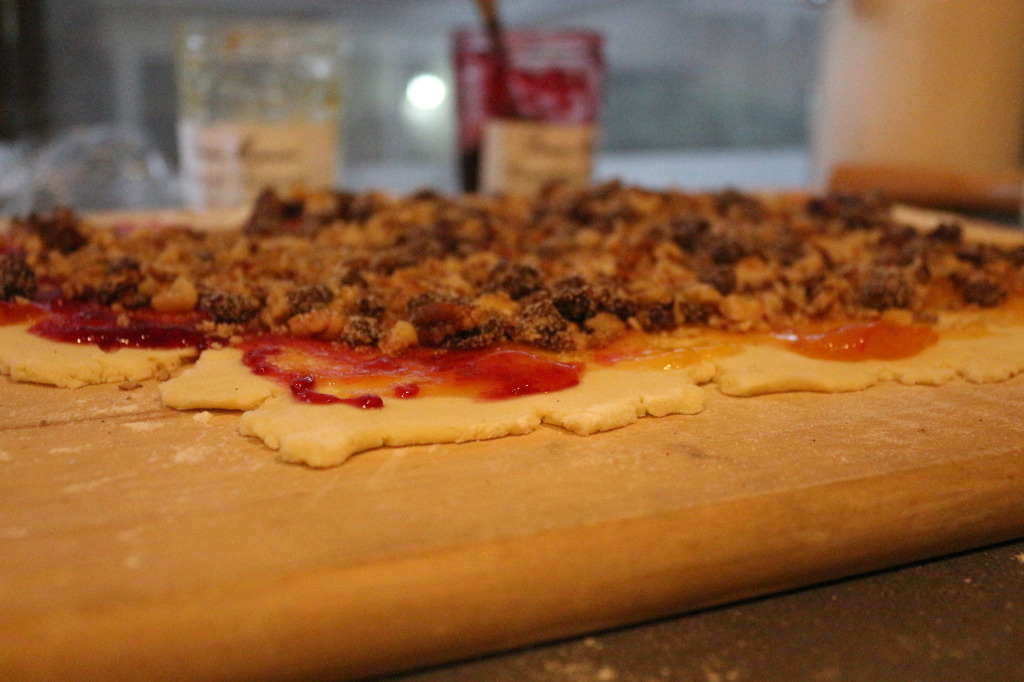 Here’s what you need (and FYI – I like to make a double recipe, but you can of course just cut this in half):

For the doubled batch of dough:

For the doubled filling:

1.5 jars of jam (I did half raspberry and half apricot the first time around, but ran out and threw some strawberry in the second time around – rasp and apricot are the most traditional flavors)

1 1/2 cups dried fruit, finely chopped (I did currants and dates the first time, about half and half; second time I did raisins and dates, about 2/3 raisins and 1/3 dates – both combos were great – raisins are the most traditional filling)

1.  The night before, or a few hours before you actually want to prepare and bake the cookies, prep the dough and the filling:

– For the dough:  Make one batch of dough at a time.

2.  Prepping the cookie rolls:  Remove your dough from the fridge one at a time.  Flour a flat surface and place the dough on the surface.  Sprinkle a bit more flour on the top.  Then using a rolling pin, roll out the dough into a “rectangular” shape about 1/8 to 1/4 inch thick.  I will say now this is the most frustrating part, so just go with it.  Keep flipping the dough.  Keep adding flour to prevent sticking.  If it cracks, just smash it back together.  If it doesn’t have nice edges, just grab a piece of dough, stick it on top and roll some more. 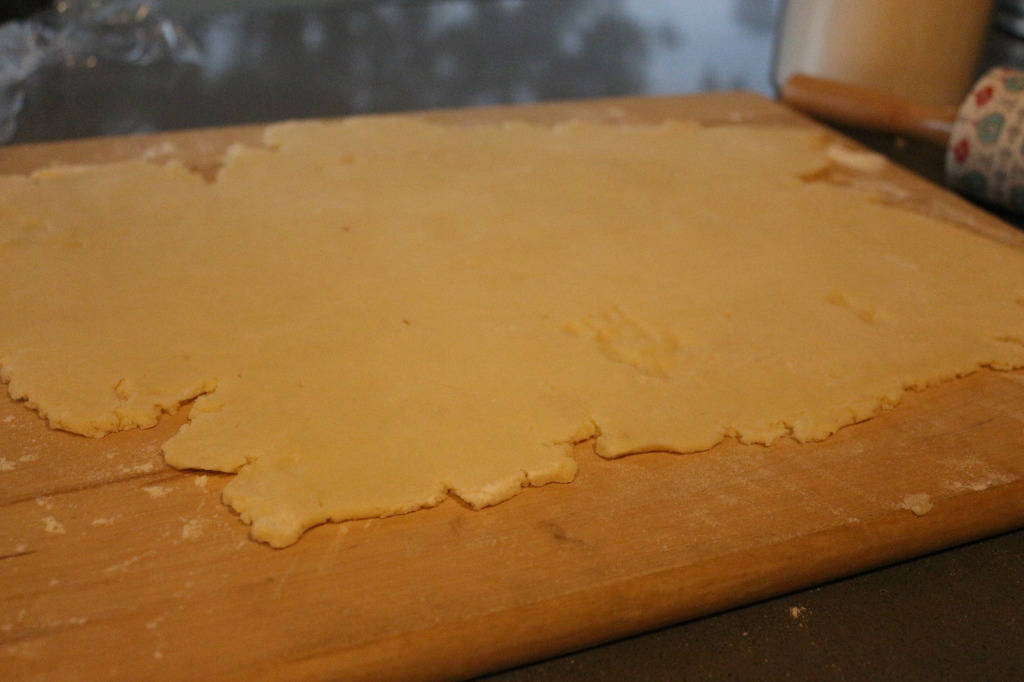 3.  Once the dough is rolled out, spread enough jam on the dough to cover it in a thin layer.  This probably takes about 1/2 a cup or so.  You can combine flavors or do one set one flavor and one set another. 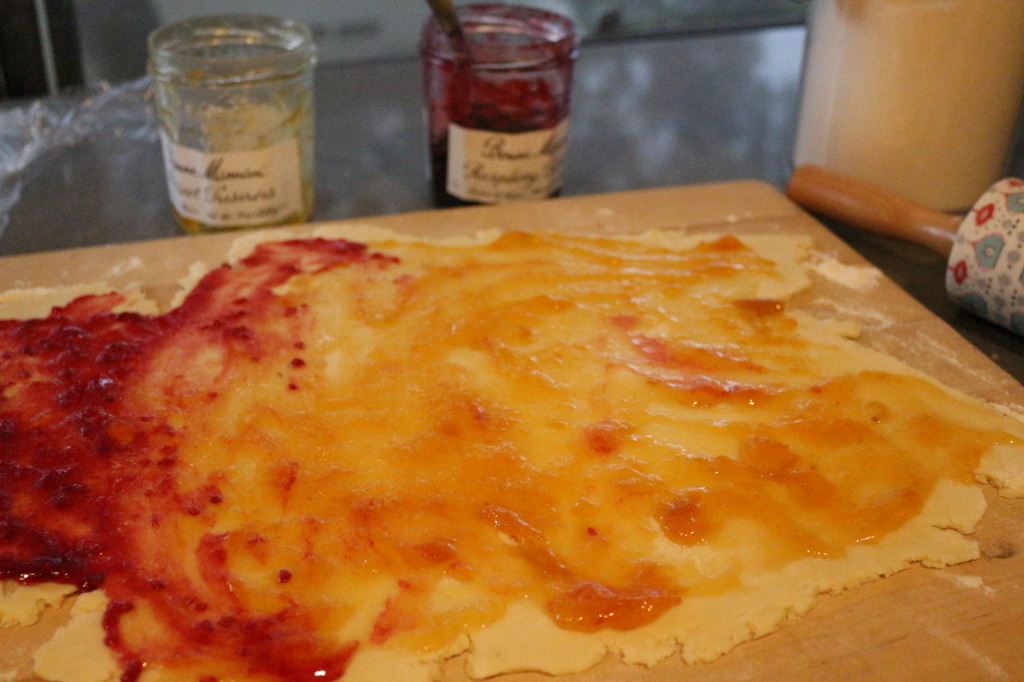 4.  On top of the jam, sprinkle about one-fourth of the nut/fruit/sugar mixture.  Then, on the long end, roll the dough into a pinwheel as tightly as you can.  Wrap the log in the plastic wrap the dough was wrapped in (or a new piece) and refrigerate for at least an hour.  Repeat with the other three pieces of dough, jam, and filling.  Try to save some of the sugary residue of the filling for baking. 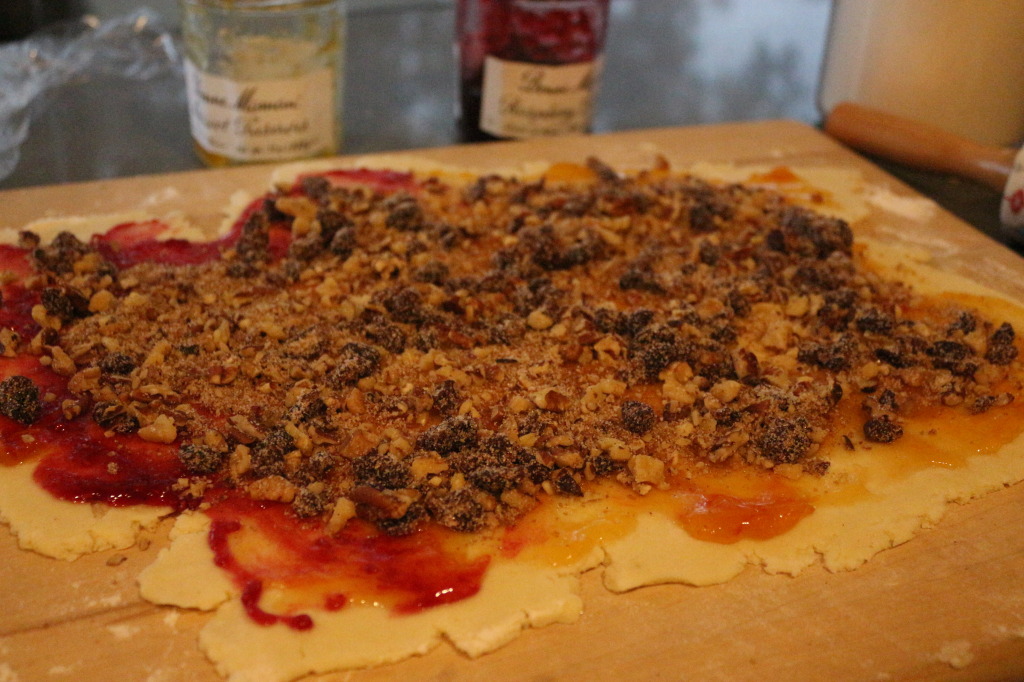 5.  Baking the cookies:  Preheat the oven to 350 degrees.  On a baking pan, spread out a sheet of parchment paper.  Spray it with non-stick cooking spray.  Then sprinkle some of the remaining cinn/sugar onto the baking pan (or if you used it up, just a bit more sugar).

6.  One at a time, remove the logs from the fridge and cut into 1/4 inch circles.  Arrange on the pan with a bit of space between each cookie, and bake 15-25 minutes, until the tops/edges are slightly golden.  (The thinner the cookies, the less baking time needed – I recommend checking them at 17 mins to see if they need more time or not.) 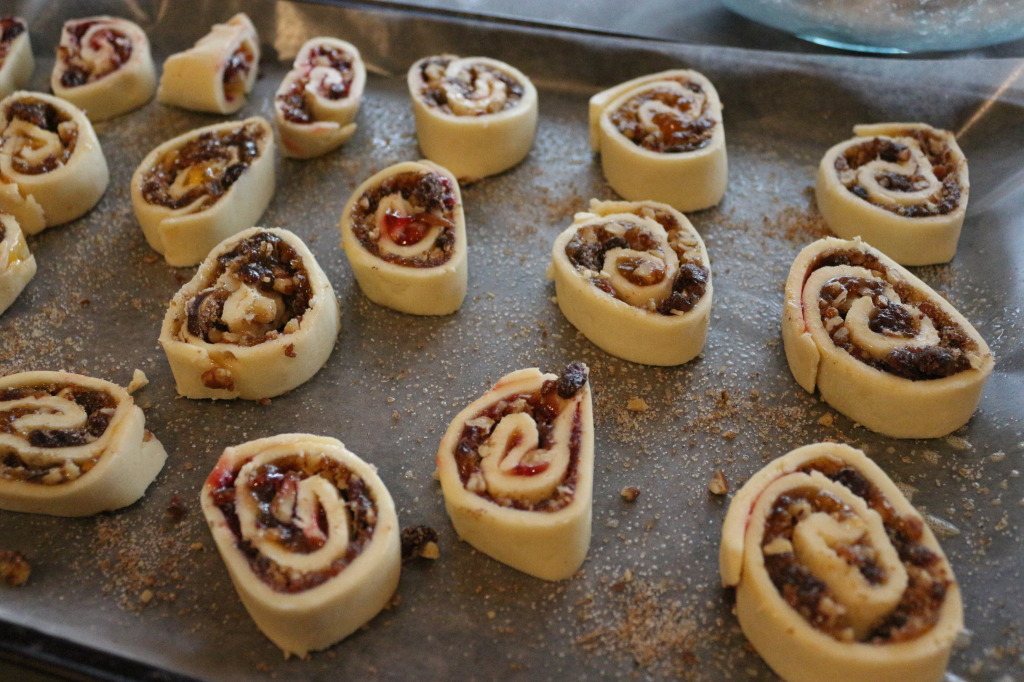 7.  When the cookies are done, remove immediately to a nonstick sprayed cooling rack.  (If you wait to remove, they stick.  Don’t worry if they get a little misshapen when you remove.  The most important part is the taste.)  Repeat with the remaining logs until all cookies are baked.  Allow to cool (if you can) and then enjoy!  Store in airtight containers for up to two weeks, or freeze. 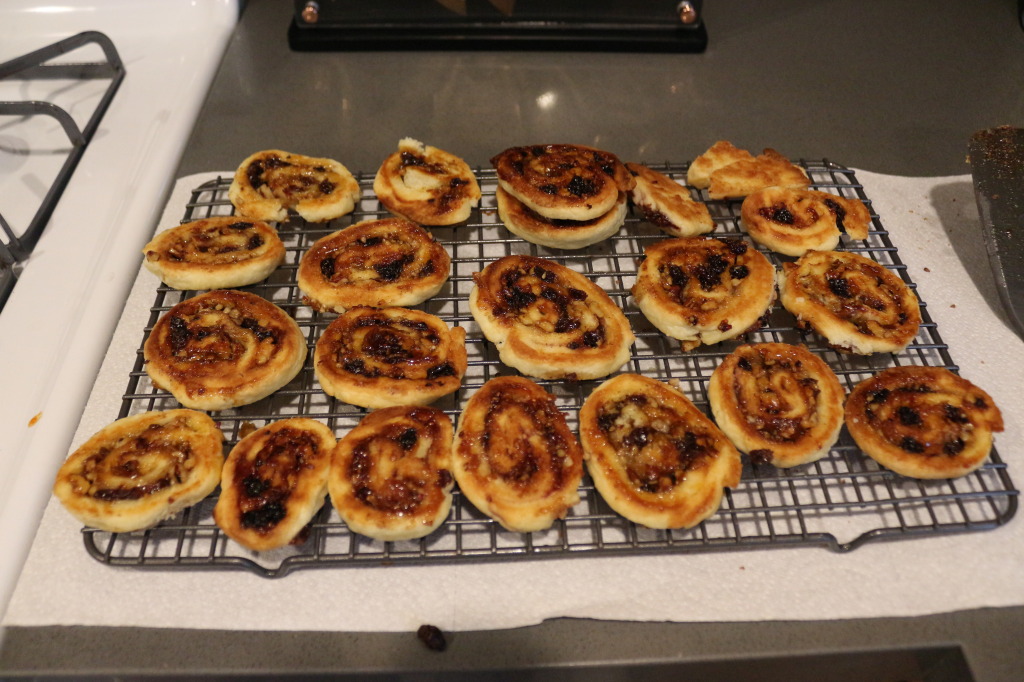