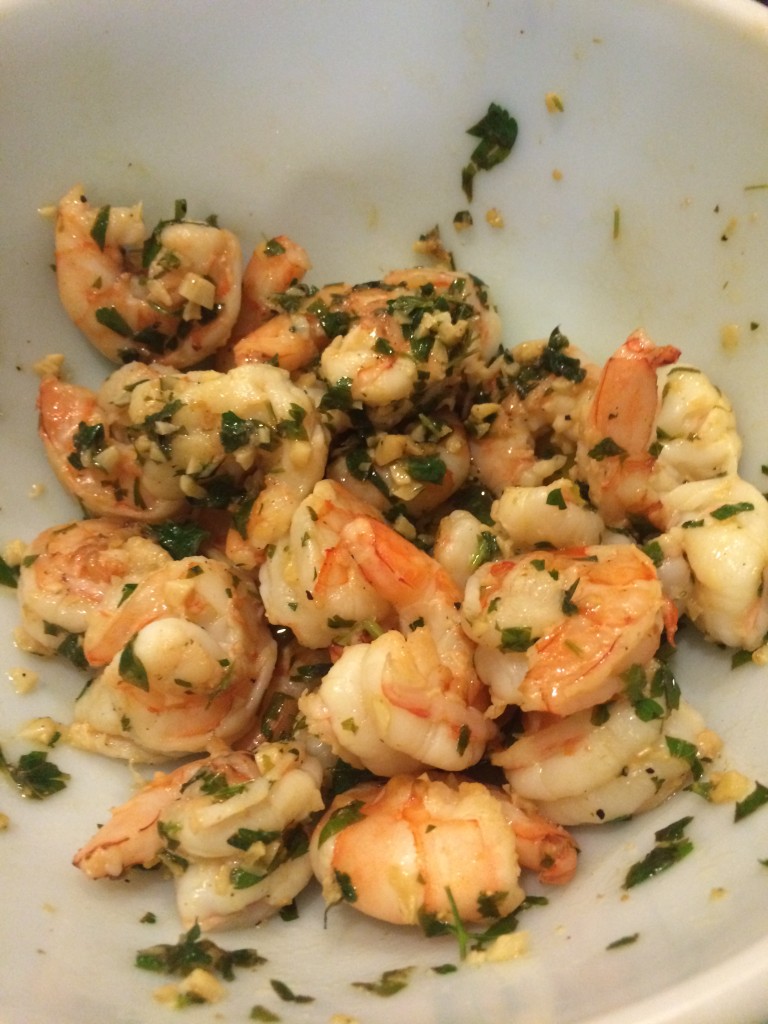 For Valentine’s Day, Patrick and I asked Grandma and Grandpa if they were “free” for dinner.  Grandma said of course, and could we please incorporate shrimp or fish into anything we ate – regardless of the cuisine – at Grandpa’s request.

Grandpa’s response was too good to paraphrase, so here it is:

With that said, I knew I had to make a meal to remember.  I had never cooked shrimp before, so I pulled out my Cook’s Illustrated cookbook, did some research, and learned the ways to make shrimp taste the best.  This required Patrick and I to take a trip to the Santa Monica Seafood Market and to peel and de-vein 2 pounds of shrimp.  Despite the bit of work, the outcome was so delicious, and Grandpa liked the shrimp so much I wasn’t sure he would even share with my Dad, his own son. 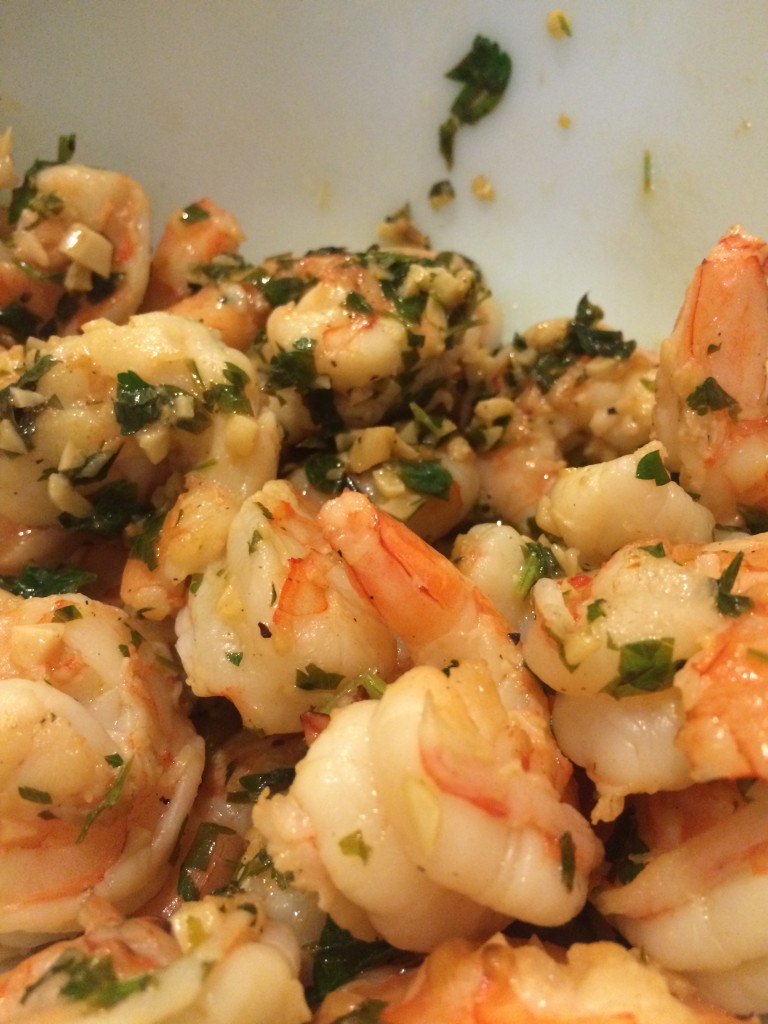 2 pounds extra large shrimp (about 21-25/pound), with their shells on, either frozen, or fresh/thawed at a place you trust

1.  First, a few tips on what I learned in my shrimp research.

(a) Shrimp is almost never sold “fresh.”  Rather it is caught, frozen, and then sold frozen or defrosted.  If the market isn’t known for fish, buy them frozen and defrost yourself.  If it’s a trustworthy place (e.g., Whole Foods, a fish market), then buying pre-defrosted is fine.

(b) Shrimp frozen with the shells on fare better than shrimp frozen without the shells.  Apparently it affects the texture.  That’s not to say that frozen, shelled shrimp wouldn’t be great, but if you want creme-de-la-crustacean, get them with shells on.

(c) When de-veining shrimp, you are actually just removing their intestines.  But they are small, so it isn’t too gross.  You will find these on the shrimps’ backs.  Simply cut a shallow slit in the back, put the knife under the vein, and pull out.  Patrick and I also actually removed the vein running through the belly of the shrimp too, using the same technique.  Not sure this was necessary, but we did it anyway.  To see how it’s done, I recommend watching a YouTube video on shelling and de-veining shrimp.

(d) Apparently stores use all different names for different types of shrimp.  Large, jumbo, extra large, etc.  So, the key to what to buy isn’t the name of the shrimp, but how many there are in a pound.  This recipe called for extra large shrimp, which, by Cook’s Illustrated standards, meant 21-25 per pound.  So best to figure out the number of shrimp per pound and go from there.

2.  Okay, let’s get cooking.  First, you need to prepare your shrimp.  If they aren’t defrosted, defrost them.  Then, remove the shells, the tails, and de-vein your shrimp.  Set them aside when you are done.

3.  Prepare the rest of your ingredients because the cooking part goes really fast and the shrimp will literally be ready to eat in minutes.  Mince your garlic, squeeze your lemon and add the vermouth to the juice, chop your parsley.

4.  Now, cooking the shrimp.  Heat one tablespoon olive oil in a skillet until smoking.  Add half of the shrimp, cook until just opaque, about 1-2 minutes, and remove from the heat.  Repeat with the second pound of shrimp and another tablespoon of olive oil, and add to the bowl with the other cooked shrimp.

6.  Turn off the heat, add the lemon juice and vermouth, and stir well.  Turn the heat back to low, add last two tablespoons butter and chopped parsley, and stir well to combine and melt.

7.  Return cooked shrimp to the pan, and allow to cook in the juice for another minute or two.  Serve immediately and enjoy! 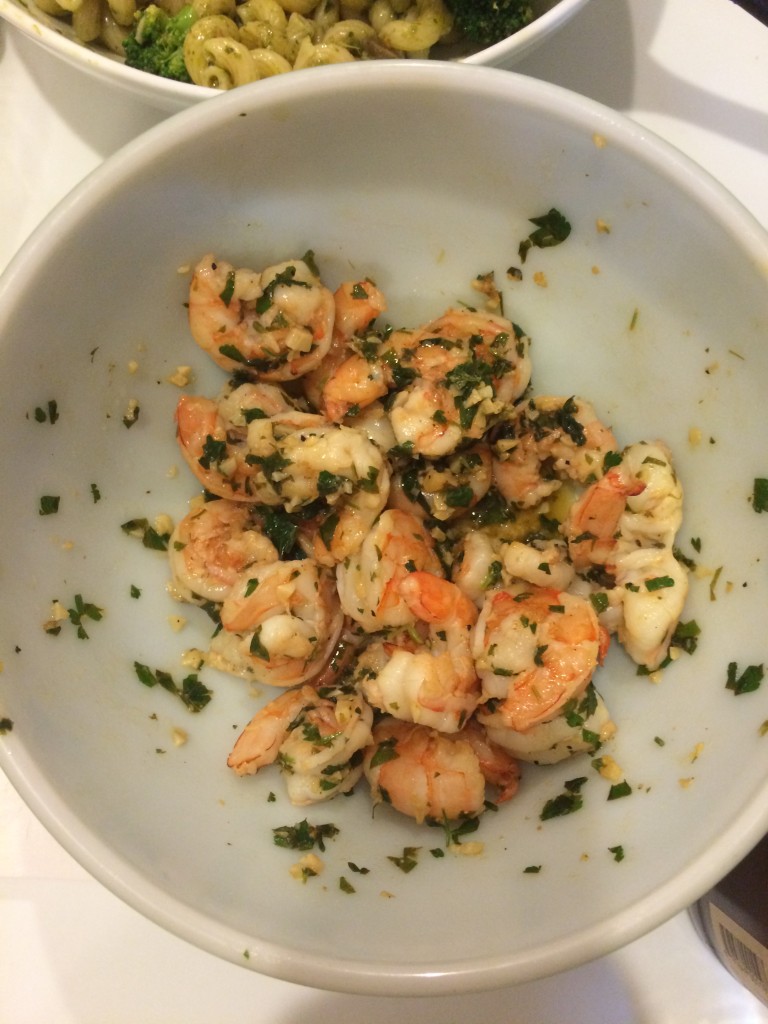 This entry was posted in Mains, Sides and tagged Lemons, Seafood. Bookmark the permalink.